The Hotel Höchster Hof is a China friendly hotel in Frankfurt. We take pride in ensuring the wishes and requirements of our Chinese guests are always met. Therefore the hotel reservation website HRS has awarded the seal of quality “China Friendly Hotel” to the 3 *** Hotel Höchster Hof. The hotel as a China Friendly Hotel is listed on the Chinese website of the online Hotel Reservation System (HRS). Many Chinese travellers are looking for a suitable hotel for their trip to Europe on this website. The Hotel Höchster Hof could be called a pioneer when it comes to catering to Asian travelers. Even though the number of Chinese travellers to Europe is continually rising, only few hotels have so far adapted to the particular requirements of these guests. The Conference Hotel Höchster Hof is an exception here, as a China Friendly Hotel, it offers special services to Asian business and leisure travellers: wireless LAN internet connection, WiFi, an electric kettle in the room, Chinese soups and chopsticks, slippers and a bottle of water. On request, an adapter for Chinese electrical devices is available.
All of these services are included in the room rate.

The China Friendly Hotel is just 10 kilometres from the city centre so all sights can be reached quickly. The famous Cathedral St. Bartholomäus, one of the biggest sacral buildings in Germany, is in the heart of the historic town centre. St. Bartholomäus was never an episcopal church, however, Roman-German emperors were elected and crowned here. As a result, the catholic chapel received the honorary title of cathedral or “emperor’s dome” in the 18th century. The St. Paul’s Church is also of great historic significance, it has often been called “the cradle of German democracy”. The first freely elected German parliament assembled here in May 1848. The Römer is one of Germany’s oldest and most beautiful town halls. The stunning facade and the magnificent Kaisersaal (Emperor’s Hall) impress visitors from all over the world. Equally impressive is the Alte Oper (Old Opera). This building was destroyed during World War II but was restored to its former splendor in the 1970ies. The Opernplatz, in front of the opera, features the famous Lucae fountain. It is a popular place for a relaxing break because of its shady trees and cosy street cafes. The Fressgass, located between the town hall and the Opernplatz, makes gourmets feel like they are in paradise as many small delicatessen are situated here. These food stores offer a large selection of delicacies from all over the world. Nearby is Goethestrasse .Many designer boutiques selling luxury brands and accessories can be found here so a very special shopping experience is guaranteed. The Palmengarten, Frankfurt’s botanical garden, invites visitors on a botanical tour around the world. On 22 hectares, the fascinating flora of several vegetation zones can be admired in many gardens and green houses. The famous Frankfurt Zoo is the 2nd oldest zoological garden in Germany, about 4,500 animals have found a home here. The compounds and cages resemble the animals’ natural habitat as much as possible to ensure the animals live in a species-appropriate environment.

Click the chinese flag to to read this in chinese: 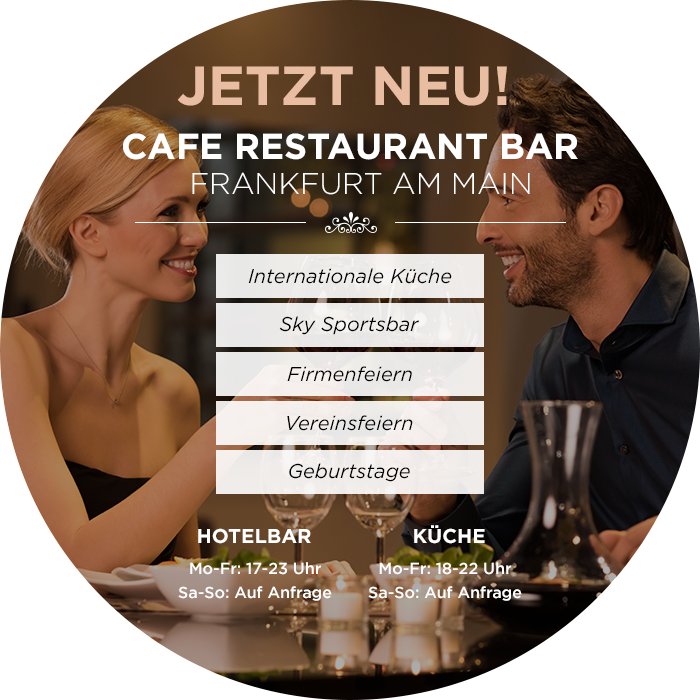